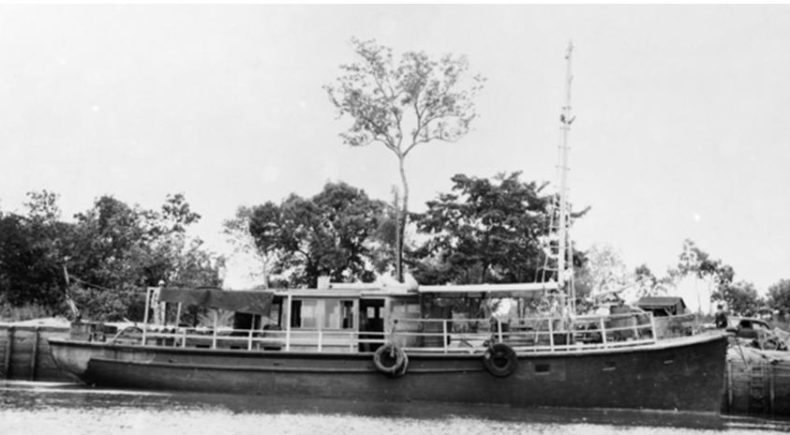 “…    We  sailed  again  that  afternoon.  Navigation  was  tricky as the charts were inaccurate and the reefs unbelievably treacherous. The skipper posted me right up on the bow and threatened to put my voice up two octaves if I took my eyes off the water for a second

On that first night in Oro Bay we were taking on drums of high octane petrol. It was too hot to sleep below decks and far too noisy on deck with cargo being slung from the Liberty. I took some blankets and got down into the dinghy swinging in the shadow at the stern of the Bundaberg. I made a reasonably soft bunk by putting the blankets  on the  floor.  The  little boat  rocked  gently  on  the tide  and very soon I was sound asleep. My  dreams  were  interrupted  by  strange  noises.  I  sat  up  in  the dinghy, not sure where I was nor what was happening. There was a blinding flash followed instantly by a deafening clap like thunder but the bomb fell harmlessly into the sea. I sat up on one of the thwarts to take a look at what was going on. It seemed unreal. Searchlights were criss-crossing the blackness above. Ack-ack shells were bursting high in the sky and Bofors guns were sending up endless streams of tracers.  Every now and then a single bomb would burst, or a string of three or four bombs – crrump, crrump, crrump.”

Actor David Haviland kindly donated his time to read from WW2 Veteran Bill Lunney’s bio.  David took up the story from the time Bill started training at age 15, and takes us on a journey with young Bill into New Guinea.

The trawler Bundaberg (S-101) of the Small Ships Section