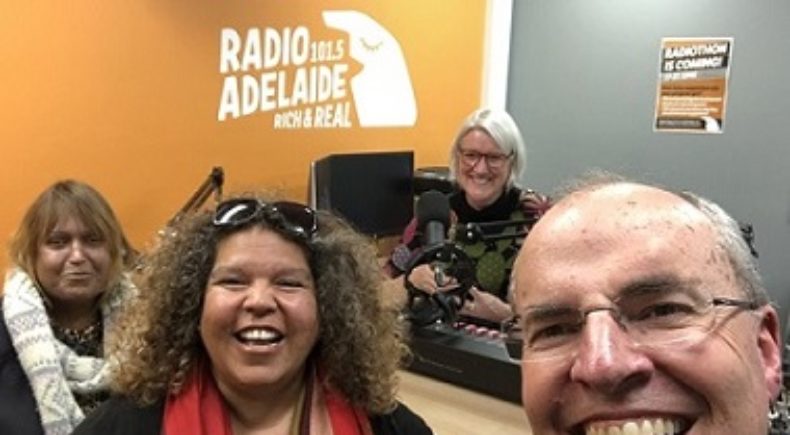 This is our last Anangu Lands Paper Tracker Radio Show. Uniting Communities has taken the decision to no longer produce the show as the organisation wants to ensure that its work is more connected to the work of its staff and the experience of its clients – its resources are being distributed to other areas of existing public policy with which Uniting Communities and its services are engaged. So, we thought we’d take a trip down memory lane and talk about how the radio show began, who was involved in producing this show and reflect on whether the show has made a difference in getting information out to Anangu communities and advocating in the interests of communities.

The Anangu Lands Paper Tracker Project of Uniting Communities was set up in 2007 – to track government commitments, policies and programs that affect Anangu communities. Later on, as part of tracking this work, the Anangu Lands Paper Tracker Radio Show was set up in 2011 – this let us share information directly with Anangu in Pitjantjatjara Yankunytjatjara.

Over the eight years of the radio show, the Paper Tracker has produced 366 shows and has covered a range of issues that affect Anangu – including community-based dialysis; ear and eye health; government policies and legislation; infrastructure and housing; keeping children safe and the Mullighan Commission of Inquiry, income management; jobs and unemployment including a focus on the CDEP, CDP, BasicsCard and Cashless Debit Card; the importance of art centres; access to healthy and affordable food, as well as a number of other important issues.

For this final show, we’ve invited Jonathan Nicholls, Karina Lester and Rose Lester, to join with Sue Tilley in sharing memories and thoughts about the Anangu Lands Paper Tracker radio show and the impact the show has had over the years.

This program is a shortened version of a much longer interview. If you’d like to listen to the full interview you can visit the Paper Tracker website and listen to the podcast.