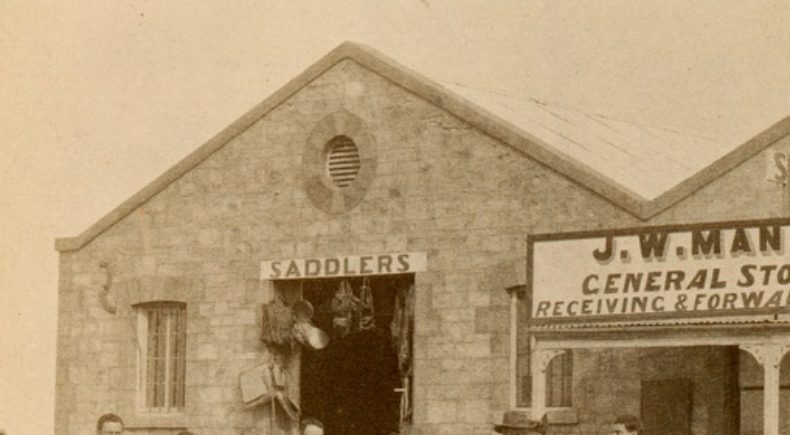 The little town and locality of Farina in the remote far north of South Australia has contributed more than its fair share to the defence of our country. During World War I, 33 men who were born in Farina enlisted… 5 were killed in action, 10 were wounded and one died at sea en-route to England.  During World War II, 35 men born in Farina enlisted.  The youngest was 18 when he enlisted and the oldest was 45. Three men were killed in action and a fourth died during his service in the army.  It was a huge commitment from such a small population.

These days Farina is not much more than a collection of ruins.   Rob Manton, Director of Veterans SA was there recently, and chats with Sharon and Bob about Farina’s background, and why he was there this year. It’s a great story of community involvement, volunteering and regeneration.

Main Photo from State Library of South Australia (Public Domain):    Storekeeper’s premises, (J.W. Manfield) at Farina. Farina was a railhead at the edge of the desert near Marree. It was settled in 1878 and grew to its peak in the late 1880s when it sported an underground bakery, two hotels, bank, two breweries, store, church, five blacksmiths, school and brothel. It is now a ghost town. The photograph shows the owners and workers outside the saddlers and the General Store of Mr JW Manfield. The saddlers are holding their tools of trade and large leather saddle bags. The store was also an agency for forwarding and receiving goods.