On Anzac Day, the 31 year old will be a step closer to continuing the legacy of his great-grandfather and the Anzacs who’ve gone before him.

He tells us about how he’s working to achieve that goal. 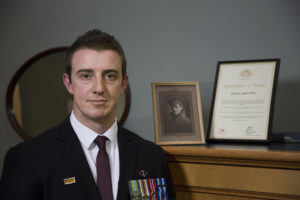 Officer Cadet Asher Price has two careers. The former full-time soldier is studying for a degree in his civilian life while training to become an Army Officer at the Adelaide Universities Regiment.

Photos of Asher Price provided by and approved for use by Defence Media HQ 9 Bde.