During World War Two, the small steamer SS Fingal was hit by torpedoes from a Japanese submarine off Nambucca Heads NSW, and sank within a minute.  John Bird, a crewman on board the Fingal was just 15 at the time and tells the story, including how if it hadn’t been for an RAAF Avro Anson from No. 71 Squadron chasing the USS Patterson to turn and pick up survivors, many more lives could have been lost.  John tells us about living through this, and serving on other ships throughout the war. 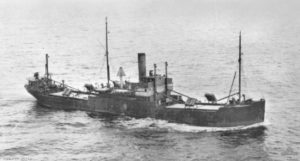 Nuolja. Photo provided by US Army Small Ships Associationa and used with permission.