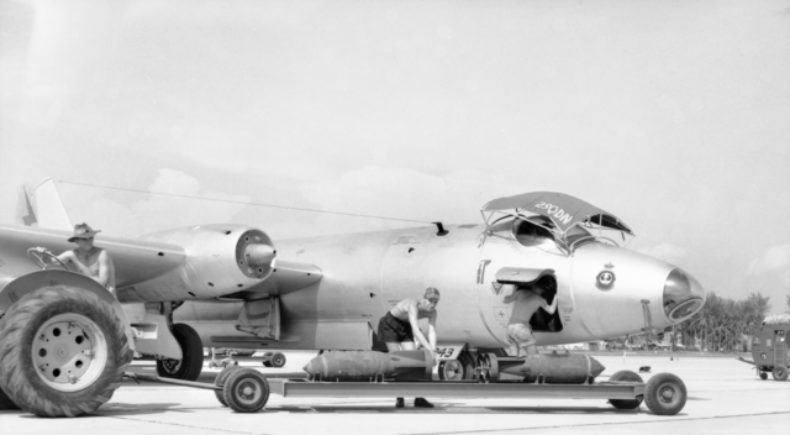 June 2018 heralds in the 70th anniversary of the beginning of the Malayan Emergency.

During the Malayan Emergency RAAF Butterworth was home not only for the men and women of the Royal Australian Air Force (RAAF), it was a place their families called home. Brian Weston joined the Air Force at the age of 17 with the dream of flying jet aircraft. He certainly achieved that aim and more in a career that spanned nearly 35 years and saw him rise to the rank of Air Vice Marshall.  Brian talks with us knowingly and fondly of RAAF operations into and out of Butterworth, the aircraft they flew…  and family life in the region.

The first deployment to Butterworth took place in October 1958, when No 3 Squadron deployed its Sabre fighters to Butterworth in “Operation Sabre Ferry”. The deployment of No 77 Squadron followed in February 1959, bringing the strength of Australia’s permanently deployed forces at Butterworth to two Sabre squadrons and one Canberra bomber squadron.

When the RAAF phased out the Sabre fighter and replaced it with the Mirage, Australia repatriated its Sabre aircraft from Butterworth and replaced them with Mirage aircraft.  The first Mirage squadron to deploy was No 75 Squadron, in May 1967, in “Operation Fast Caravan”. No 3 Squadron followed in February 1969, in “Operation Thoroughfare”. Mirage Cockpit AVM (Ret’d) Brian Weston who clocked up well over 2000 hours as a Mirage pilot and served in 3SQN from July 1970 to September 1972. Photo provided by Brian Weston  BGW 1972