1942  RAAF  Timor:  ‘Trapped’ Episode 2         After narrowly avoiding Japanese paratroopers on the mad drive towards the mountainous jungle, the 28 airmen, led by 24 year old Flight Lieutenant Bryan Rofe, hike to Timor’s remote north-west coast in the hope of a seaborne evacuation. They have very limited supplies, just some tinned food and a handful of quinine to treat malaria. Time and the harsh conditions are against them. The group’s survival hinges on re-establishing communication with RAAF Station Darwin on an untested 180kg radio transceiver.

1942  RAAF  Timor:  ‘Trapped’  Episode 3           The airmen have eaten most of their tinned supplies the previous night, a decision Bryan is beginning to deeply regret. The Japanese raid on Broome on March 3, 1942 has all but ruled out the stranded airmen being rescued by flying boat. Flight Lieutenant Bryan Rofe decides to take a small party north on a supply run and sends another party south in search of beach firm enough to support the landing of an aircraft to get the men. Meanwhile, a ruthless Japanese soldier is ordered to round up all displaced Australian servicemen hiding in the Timorese jungle. 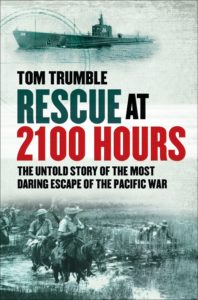 Publisher- Penguin Books. The ‘Trapped’ series of podcasts is based on Rescue at 2100 Hours written by Tom Trumble in honour of Patricia Rofe, wife of Flight Lieutenant Bryan Rofe. Tom’s Grandmother and Grandfather.