Harry Cruger: 15yo in convoy with troops heading north In August 1943 Harry signed up with the US Army Small Ships Section at No 10 Walsh Bay, Sydney, and was transported by Troop Train to Townsville to join MV Bloemfontein, sailing to Milne Bay New Guinea.

Harry’s service over the coming years carried him to many areas of the world.   His ship SS Corio was the only one in Port Adelaide when Peace in The Pacific was declared, and the crew went to the hotel to celebrate. The Padres from the Flying Angel  and The Apostles of The Sea sobered the crew up and got them on a bus into Adelaide to march through the City streets…  the only Merchant Seamen in the celebration march.

Over a period of 20 years Harry served on 29 ships.  He has been awarded both US and Imperial Australian campaign medals in recognition of his service.  He’s been inducted into the Ancient Order of St Christopher, and the US Army Transportation Corps Hall of Fame.  A wonderful achievement…   harking back to that day when little more than a child, he stood on the deck of the SS Ormiston steaming out of Sydney Harbour.

Harry’s Dad, William (Bill) August Cruger was also a seagoing man, and served on Merchant Navy Ships in both WW1 and WW2.

A fascinating insight into life at sea during both WW1 and WW2 here from Harry Cruger.

Main photo:    SS Corio.  The only ship in Port Adelaide when Peace in The Pacific was declared. Photo courtesy of US Army Small Ships Assoc 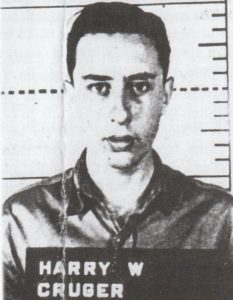 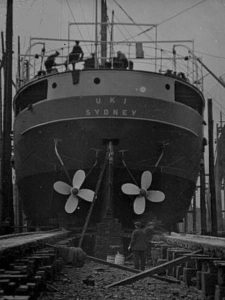 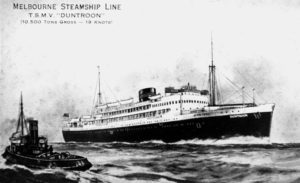 Note..   SS Uki:  The steam ship Uki (S-177) of the Small Ships Section, United States Army Services of Supply, Southwest Pacific Area (USA SOS SWPA) at No. 8 Wharf. The Uki had been used as a minesweeper in the RAN prior to being transferred to the Small Ships Section on 18 December 1942. Its service included the transportation of supplies to locations in Papua New Guinea. Initially Australian ships were requisitioned and chartered by the Small Ships Section. Construction of ships for USA SOS SWPA commenced in Australia in 1942. Approximately 3000 vessels were constructed, including freighters, launches, tugs, towboats, lighters, rescue and salvage boats and a large number of barges. An additional 4000 lifeboats and dinghies were built. Around 3000 Australians enlisted in the Small Ships Section during the Second World War. They were not inducted members of the US Army, but were civilians attached to the Army. They were often too young, too old or physically ineligible to serve in the Australian armed forces.  (AWM notes)