Last week guest interviewer Alex McLeod and author Professor Chis Maxwell examined how James Chisholm arrived with the Third Fleet as an illiterate penniless soldier and became one of the most influential men in the new Colony.  He also became a leader in the movement for democratic reform.  Today Chis and Alex build on that, examining how James fitted into the expanding Colony with its growing complex society, characters and needs, and how the colonisation affected the Aboriginal population of the area.  A fascinating story from our past that reflects to modern day Australia. 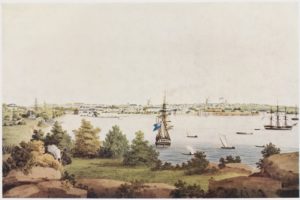 View of Sydney from the east side of the cove. Circa 1811 John Eyre. State Library NSW.