Part One of our special month long segment of broadcasts about the Aussie men….  well…  most were little more than children when they went to sea during World War Two to serve in the US Army Small Ships, or in the Merchant Navy.  Not many people  know their stories…  it’s time they were told!

We begin our segment with Len McLeod.

Leonard Roy McLeod was born on the second of June, 1926, the youngest child of Ruby and John McLeod, a working class family in the western suburbs of Melbourne. Len was barely 4 years old when his father died from the effects of gassing during WW1 on the Western Front in France.  Len grew up as a Legacy child and although times were tough his mother managed to feed the family and make repayments on the war service loan for their home in Footscray.

In the early stages of WW2 Len lied about his age and enlisted in the Army twice at the age of 15 before being discovered and discharged.  The third time he was more canny and succeeded.   His Mum thought he was in the Home Guard, or the Cadets.  However, her darling son, just turned 16 years of age, was on a train to Queensland as part of the first intake to Jungle Warfare Training at Canungra and then on a troop ship to Port Moresby New Guinea…. and so his big adventure in life began. 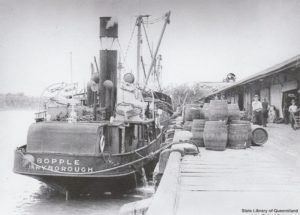 The steam ship Bopple (S-147) of the Small Ships Section, United States Army Services of Supply, Southwest Pacific Area. Australians who served Small Ships Section were not enlisted in the U.S. Army, they were civilians employed by the Army with Australian government approval. They were predominantly too young, too old, or physically ineligible to serve in the Australian armed forces. Len McLeod circa 1943. U.S. Army studio photo, taken at the time of entry in Sydney. Len McLeod with Engineer aboard the Pacific Dawn 2018