On 06.04.2019  the SA/NT Branch of the National Malaya & Borneo Veterans’ Association of Australia acknowledged the service and sacrifice of Australian soldier Signalman John Tassell by holding a special graveside service in Adelaide to mark the anniversary of his death 53 years ago during the Indonesian Confrontation with Malaysia.

Signalman Tassell died in northeastern peninsular Malaysia on 4 April 1966, aged 21, while attached to the 208th Signals Squadron (Commonwealth), 28th Commonwealth Independent Infantry Brigade Group, Far East Land Forces.  He was buried in the Terendak Garrison Cemetery in Malacca, Malaysia with full military honours. On 2 June 2016 he was repatriated in a C-17A Globemaster aircraft in Operation ‘Reunite’, and is now at rest in Enfield Memorial Park in SA.

In this ceremony, the Graywood Medal was presented to John’s sister, Ms Vicki Crannaford by the President of the SA/NT Branch, Mr Brian Selby. Vicki was accompanied by her sisters Bev and Dianne, and other family members. The Graywood Medal is an unofficial award which acknowledges those killed or wounded in action in the service of Australia since the end of World War 2. This award of the Graywood Medal was made possible by the Korean War Veterans Association of NSW.

Vicki Crannaford and Dianne Sampson (two of John’s sisters) tell what having John back in Australia means to the family: 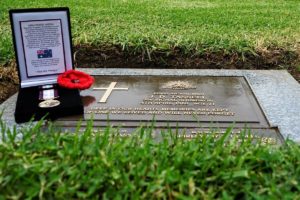