We’ve had quite a few calls from people who missed a couple of broadcasts due to Xmas and New Year… and there was a technical hitch with our live-streaming and ‘Listen Back’ facilities, so we’re re-broadcasting the interviews from those dates……  this is one of them.

Navy Veteran, Naval Historian/Author Dr Ian Pfennigwerth tells us it’s time our Navy men and women’s stories were told…  we now want more than just accounts of grey sided ships and statistics.  We want the stories and recognition for the work done by our Navy personnel.

Bravo Zulu Volumes One and Two contain the very first comprehensive accessible list of honours and awards (gongs) earned by our Royal Australian Navy personnel, and the stories of why they were awarded.  It’s long been missing from our records and book shelves!

Jonathan ‘Buck’ Rogers was born in Llangollen, Wales, on 16 September 1920. He joined the Royal Navy in 1938 and served, with the service number D/SSX 28071, in British waters, the North Sea, Atlantic and Mediterranean during the Second World War. He was awarded the Distinguished Service Medal in 1944 as a Petty Officer coxswain on the Motor Torpedo Boat 698, while it was operating in the Dover Strait between March and May 1944. Rogers left the Royal Navy in 1946 and subsequently emigrated to Australia, where he joined the Royal Australian Navy in 1950, serving with the number R/40859. He served in the Korean War and was promoted to Chief Petty Officer in 1956. On 10 February 1964 Rogers was serving in the destroyer HMAS Voyager. During night time excercises with the aircraft carrier HMAS Melbourne both ships collided and Voyager was cut in half by the larger carrier. Rogers was in the forward cafeteria of the Voyager with between fifty and sixty sailors, many of them young Ordinary Seamen on their first posting to a sea-going vessel. He realised that the forward section of the Voyager would sink rapidly and began organising escape through the single escape hatch. He himself was too large to be able to pass through the hatch. As the forward section began to sink Rogers was heard to lead the trapped sailors in a prayer and a hymn. For his actions he was awarded a posthumous George Cross. 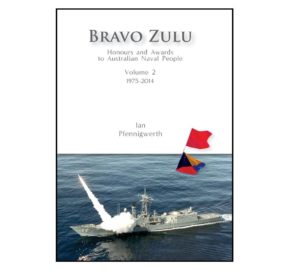