101 Nights was originally published in the UK after WW2, however, few copies made it to Australia. It has recently been republished in Australia by Wakefield Press and edited by Robert Brokenmouth.

101 Nights was written by Ray Ollis, anAustralian WW2 RAAF Lancaster bomber Navigator, and is based on his experience in the very first radio counter-measure squadron.

Ray was a man ahead of his time, and a superb writer. He had bi-polar disorder.  These days he would’ve been diagnosed with PTSD. His insight into war and human frailties is amazing. He’s one of the few people who’ve written a bomber command memoir to deal with all aspects of the humanity and inhumanity of bombing and nailed it, long before anyone was asking these questions.

Robert Brokenmouth talks to Helen Meyer about the book and the author. 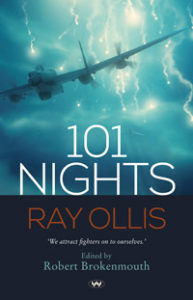