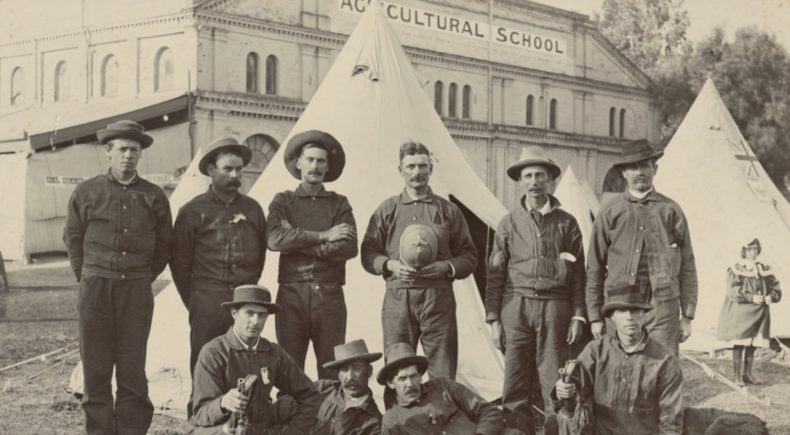 Why did Australians such as Tony Stimson’s Grandfather volunteer to fight in a war where there was no obvious Australian interest… and why is it sometimes called Australia’s forgotten war?  Is that a contradiction? What did the South Australian Contingents who fought there think of South Africa…  the people, the landscape, the climate, and the Boer enemy? Tony Stimson gives an enlightening, interesting interview. Tony Stimson (right) with Albert Jordaan, landowner, after the 2017 unveiling of the memorial built on his land, outside Lindley in Free State. The memorial commemorates everyone who fought on the ridge Leeuwkop on a very wet 3 July 1900: the British gunners who died at their guns in an artillery duel, the Boer commando under Michael Prinsloo which captured three of the six guns in the battery, and the South Australians under Capt. AEM Norton 4SAIB, Tony Stimson’s grandfather, who recaptured these guns a few minutes later. Norton was awarded the Distinguished Service Order for this action. Photo provided by T Stimson.

Main Photo State Library of SA   SLSA PRG 335/60/25:  Men of the 4th South Australian Imperial Bushmen (4SAIB) training in the Old Exhibition Grounds camp on Frome Road, Adelaide. They are in dungarees as their uniforms have not been manufactured. This unit sailed for South Africa on 1 May 1900, 62 days after Premier Holder sent the telegram to London saying that as requested it would raise a fourth contingent to be funded by the Imperial Government. Hence the ‘Imperial’ in the contingent’s title.