Consultation into the proposed nuclear waste storage site in South Australia must be carefully shaped to take Aboriginal people’s views into account and incorporate existing decision making structures, says a member of the Board which is overseeing the current state-wide discussions.

Mr Parry Agius is a member of the Nuclear Fuel Cycle Royal Commission Consultation and Response Advisory Board  Board, which was was established by the SA Government this year to oversee community discussions on the proposals for international nuclear waste to be stored in South Australia.

He told Aboriginal Way that he will advise the new Board on the effectiveness of the state-wide consultation for Aboriginal people in particular.

“My job is to actually look at that communication, consultation process and look at whether it has the ability to do what it has said it could do.  That is to provide information, give the community the necessary access to information and then advise the Board that this is an appropriate model to approach.  And if not what’s missing, what could be improved, what could be thought about” he said.

Mr Agius explained what he considers to be the most crucial elements to make sure that the consultation is effective for Aboriginal people in South Australia.

Mr Agius acknowledged that many Aboriginal people in South Australia are opposed to any nuclear expansion. 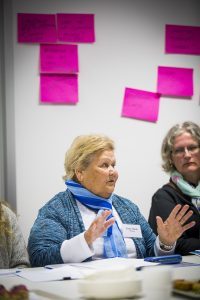 “Relating to the Maralinga history, community is deeply affected by that, and no-one can deny that, it’s been a number of issues that’s been raised since the Maralinga days and post Maralinga, even in the 90s and 2000s it was a big issue then and now with the report being tabled, it’s rekindled strong views about the past and brought them to the present” Mr Agius said.

The question would be how do we manage the present and the past at the same time and what are the enlightening tools that are actually going to make that connect.  And you know, the Premier is already aware that Maralinga happened, and being a previous minister for Aboriginal affairs, he’s known that and so he wouldn’t jump into this process very lightly without understanding that issue.  So this process here, this community consultation process, is a recommendation from the report that the premier has actually given the ability for the community to engage and have interpreters at those processes, community forums, will make it even better.

Mr Agius said that Native Title structures and PBCs should be incorporated into the community consultation currently taking place.

“Yes, when I appeared before the Commission I mentioned that existing structure as a clear and contemporary direction that’s been taking place since native title’s come on board.  And how the judiciary has worked with this native title, and the communities in our state.  And that has to be introduced into the process somewhere, and part of my job on the board is to look at that in detail and to look at how that contemporary process can now be used in the consultation process” he said.

The point about bringing the contemporary model into this consultation process is just as important. Not everybody knows about that new model, that new contemporary process.  The only ones who know about it are the ones who have actually been intimately involved and even the south Australian community may not understand that model.  Hopefully the role I play on the Board will actually bring that Traditional Owner model out, and then look at how best the government will engage the community”.

Mr Agius said that he hopes Native Title groups and PBCs should be involved in the consultation from an early stage.

“My preference would be for it to come early, just so that the Premier and the traditional owners could have a respectful relationship from now into the future.  And for me that’s important.  Because it’s not only after this issue is dealt with, it’s what the relationship going to be into the future.

“Then when we’re getting closer to the other end, the pointy end where the social licence to proceed has been granted and we’re moving to the point where a place has been found, then the traditional owner group and their neighbours will probably have a major role in that area” said Mr Agius. Parry Agius with other CARA Board members